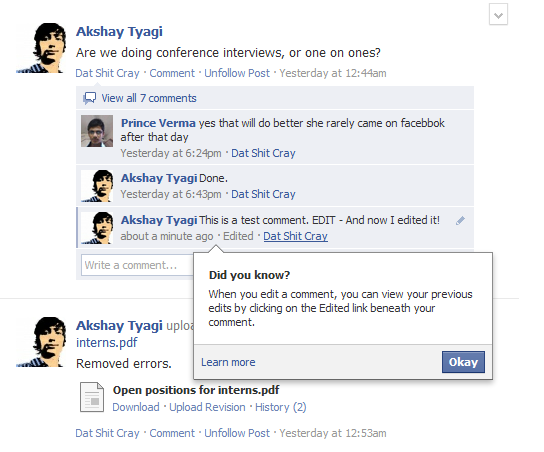 You can now finally edits comments in Facebook, so that you can remove typos. Before this update, you had a few seconds to edit your comments, now you can do so whenever you feel like, by clicking on the pencil icon. Now would be a good time for grammar nazis to go back to all their Facebook comments, and look for errors. ( Don’t do that ) 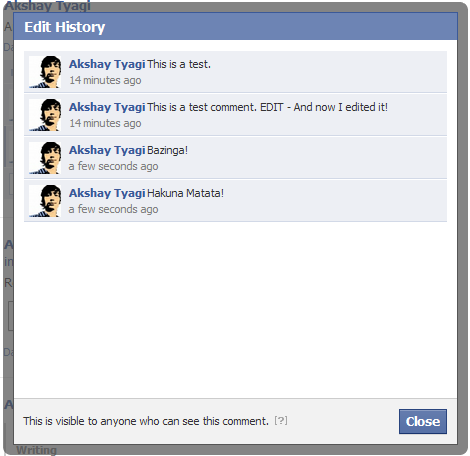 You can also view an edit history of the comment, which is visible to everyone who can see your comment. So basically, if you type something that you don’t want anybody to read, deleting it is still your best option.

While you are thinking, wow! they copied this from Google+, I am, well, thinking the same thing. But at least they are good at replicating good features in other social networks, for according to Facebook, MySpace failed because they were slow at copying, so now, their product development is driven by adding features from other social networks.

Did anybody notice that you can now tag people by using the ‘+’ sign, apart from the ‘@’ sign? Trying to make Google+ users ( yeah, those two people ), feel at home? One things for sure, the Google+’ team’s effort are not going to be wasted. The world will get them, sooner or later.

NOTE – As one of our Facebook group’s member pointed out, you still can’t edit the text of original posts, unless the post had an image.