I have been wanting to say this for a long long time. Ever since I have been on Facebook. One simple thing. Learn the rules of the Internet before you get on it.

I finally decided to make my first account on a social networking website in 2010, on Facebook ( I never went to that shitty place Orkut, which was cool because I did not have to waste my time on that horrendous UI, and crappy content. )

And since then, I have been appalled by how stupidly people use these sites. They use it like they were just talking to their group of friends, in real life. Which is not the case. No matter how much you wish for an Internet experience that just replicates your real life, online, the truth remains that this is a different place. This is the Internet. And like before visiting a foreign country, you need to learn the rules of the internet land, before stepping in. Google+ was a step in that direction, a social network that replicates real life, but that is the exact reason people don’t use it. People want the “serendipity” that Facebook offers. Being able to see what your friend’s friends are doing, and hence finding new friends. Which is completely awesome, given that you are not behaving like an idiot.

I have been collecting screen shots like this, for the past six months – 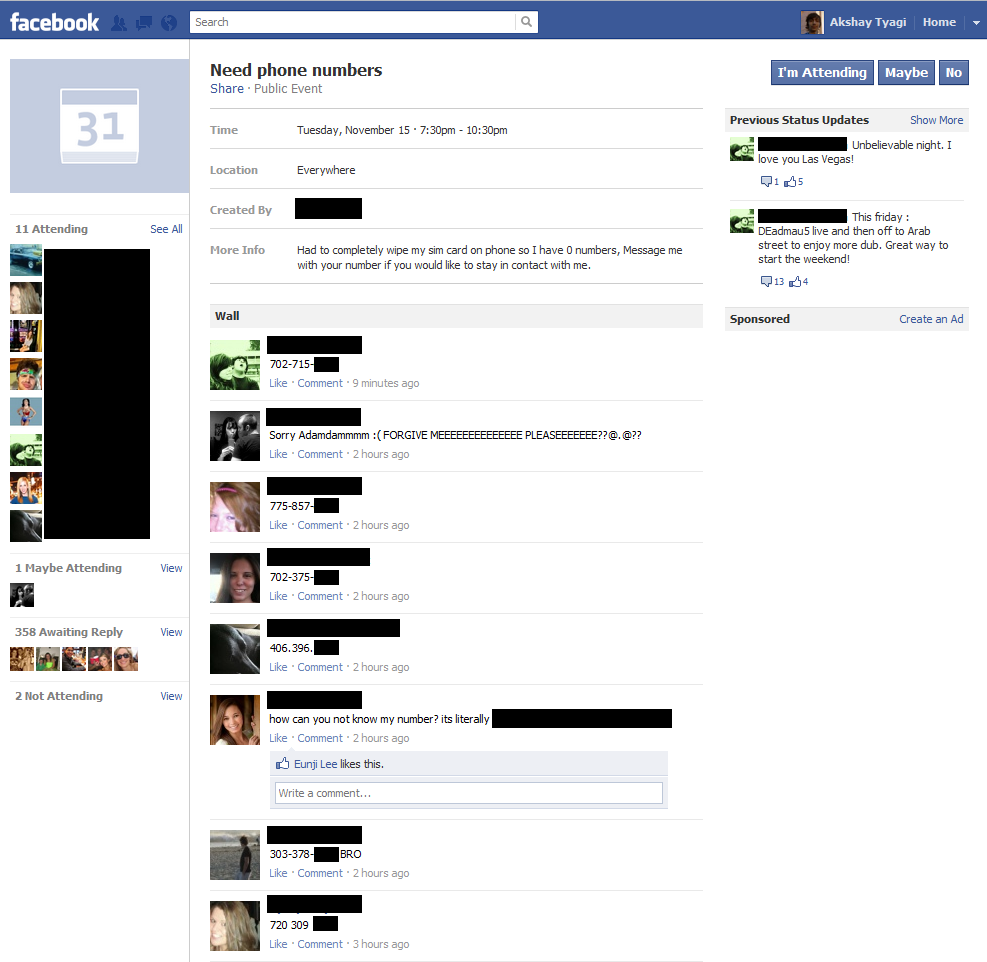 This one shows how people, unsuspectingly, make a lot of their friend’s numbers public,  by making a public event, and asking them to post their numbers, cause they lost their phone. Now take a breath, and think about the numbers of times your friend lost his contacts, and asked everybody to give him their numbers. It’s not wrong that you post your number publicly, but what I am saying is that you should know that your information is public. My number/address can be easily obtained if one was so inclined, but I know that. Most people live under the false pretense of security, not understanding how social networks work. Even if you don’t share something with the “public” setting, you are sharing with people who have two degrees of separation from you. Which could be anybody. Anyone could friend your friend, and get access to your info. The thing is, there is no “private” information sharing on the Internet. This is one of the reasons I like Twitter, because by default, your tweets are public, so you know that if  you tweet something out, everybody can read it. It’s a sad thing that people don’t even get that.

So, what’s so wrong if my information leaks out?

Well, I had a lot more samples like the FB event, and would explain how all the can be dangerous, but then I came across this brilliant talk by Tom Scott.

Oh crap! Is there a solution to this?

Kind of. Switch your Facebook account to public. I kid you not, do it. Your posts can be found by someone one way or the another, if someone is so inclined to do it. So if you start posting publicly, you would at least be well aware that this data is for everyone’s eyes, and you just might restrain yourself from putting stuff on the Internet which shouldn’t be on the Internet. There are other ways, like becoming a Facebook’s privacy settings ninja, and locking down your profile more and more. But know that, some info will always leak out. Also, I think that having to tinker with the setting to use a product is a design flaw, but that’s another issue.

BTW, none of this is Facebook’s fault. It’s the users fault. We don’t really understand the Internet, but just hop on it, cause it’s cool.