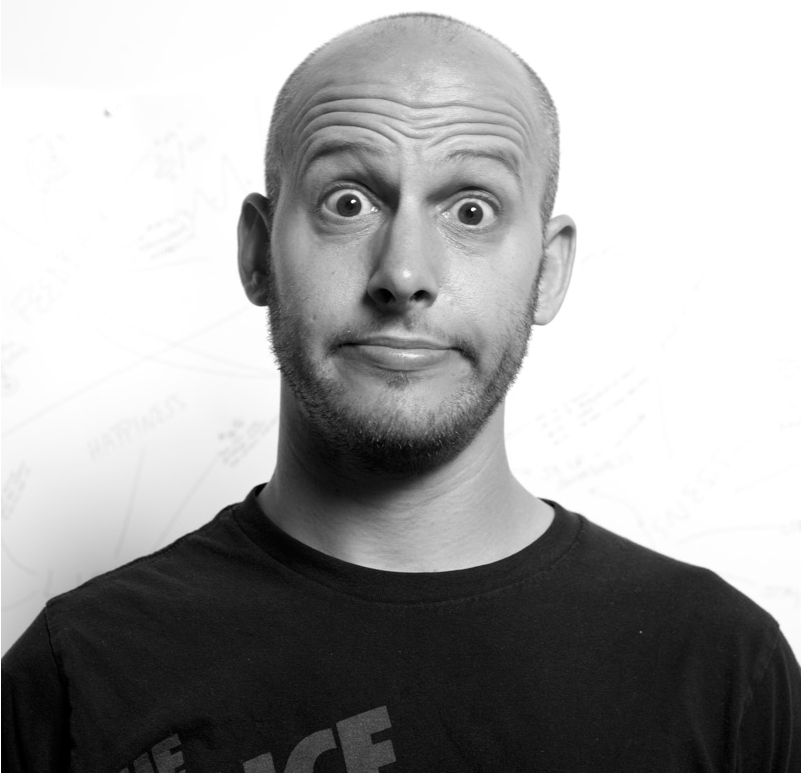 Jeff Lieberman hosts Time Warp on the Discovery Channel. He also likes to mix art with science, form with function, making them one. And then, he also composes music in his duo Gloobic. Did we mention that he has 4 degrees from MIT! We asked him he a bunch of questions –

What was the most fun part about hosting Time Warp? You usually tried most of the cool things. What was the worst?

Almost every day on Time Warp, we filmed a totally different topic, and usually these topics required specialists and experts. It’s amazing and enthralling to jump into the world of someone who spends 10 hours a day focused on a totally different thing than you do. A TV show affords the opportunity to inhabit that different world, to merge it with your own. Definitely the people that I was able to meet through the show, from water photographer Martin Waugh to Professor Splash (and even to Metallica!), these were once in a lifetime opportunities.

Probably the harder topics were things like eating competitions and extreme fighting/wrestling, where people actually inflict pain on themselves and others. As I’m interested in reducing suffering in the world, these things are tougher for me to deal with.

Now that the MIT has a trillion fps camera, can we actually shoot light? And what are the chances that you would be doing the same on some new episodes of Time Warp?

It looks like they can, but that’s what we’re always doing! It’s an amazing thing to be able to see the path of light actually moving, it was always a hope of mine to do on the show, but now that the technology is coming around, we’re actually done filming for the show, so it just wasn’t meant to be. You’ll have to visit Ramesh at the Media Lab to see!

You like to serve science and art in the same dish. Tell us more about this passion.

500 years ago during the Renaissance, artists and scientists were not seen so differently; they were seen as two aspects of the same thing. We are all seeking the truth, in its different forms. I don’t believe that the truth is something only to be found in the scientific method. The arts have much to teach, especially about getting out of our own way. I think each of us have a direction inside that we want to move, but we often doubt ourselves, we often think certain things in the external world need to happen in order for us to be happy. And I think that’s just a story we tell ourselves, that it’s not necessary. The arts and sciences have both in their own way shown me that.

It took me almost 20 years of my life though, to start understanding that art and science could be considered as one — starting at the MIT Media Lab where I worked on projects like Cyberflora with Professor Cynthia Breazeal. Since then, I am learning more and more about how they fit together. Science has a unique way of breaking the world down into parts to give us insights, but often times we lose the forest for the trees — we lose the wider picture, about our experience of life itself. And what is the most important thing in our lives? Is it the facts that we learn, or the experience that we have, our happiness, our freedoms, our direct insights and knowledge? Knowledge comes in many forms, and working in both the arts and sciences has shown me the variety of forms truth can take.

I had loved math and science since I can remember, and had painted, drawn, and played music, similarly young. But (as mentioned above), these lived in two separate worlds until MIT. Just before entering MIT, I toured the campus and visited the MIT Museum, where there was an ongoing display (still there 15 years later!) of the sculptural work of Arthur Ganson… and it totally blew me away! Here was the first artist I saw merging the arts with a scientific/engineering knowledge, in a way that was both totally transparent (you can see every mechanism in his work) and totally magical. I was hooked. In the back of my head was a new idea that in some unknown way, I would be able to merge the arts and sciences along a singular vision or path. And every day that unknown path still presents itself and evolves… I am still figuring it out!

You recently raised money for a kinetic sculpure project on Kickstarter, what are your thoughts on crowd funding?

One thing that I don’t want to do as an artist is inflate the prices of my work to artificially make them more valuable. Often artists do this in order to make a living; so I wanted to figure out another alternative. Through KickStarter I was able to say “As many people want to buy this sculpture in the next 60 days, I will make, and then I will move onto the next piece.” So, I wasn’t shutting anyone out, and by making many of the same piece I was able to use economy of scale to keep costs down. It’s not easy to get a custom-made metal robotic sculpture for $150 these days, but I was able to make 250 of them, without taking a risk of spending the money first and hoping to find buyers later. I think this direct-to-customer model is really beautiful for an artist and opens up an entirely different means of interaction for artists (and businesses) over time. I’m excited about the possibilities!

Do you [ and in what way ] believe in God/the oneness of the Universe?

By the time you post this there will be a video of a 15 minute talk I gave recently at TEDx Cambridge about this topic, which might better get at the details than I can do in a single paragraph, and I’d be glad if you shared it. That said…

The immediate problem with discussing ‘God’ is, what does anyone mean by God? What does that word refer to? And I think if you ask a thousand people, you will get a thousand different answers. So, it’s a difficult thing to have a discussion about. I think words do very little sometimes to access the reality that is right in front of us.. but every word is a metaphor, an association, to some part of reality. I think ‘god’ is a metaphor for something that absolutely transcends the ability for human thought. In some sense, it is a metaphor for that which goes beyond the capability of metaphor. And the more I learn about human perception, the more it’s clear to see that the senses and mind of a human being access only a tiny slice or view of ‘reality.’ It’s hard to remember that something as simple as the color orange does NOT exist outside of consciousness — color is created in the interaction of this human perceptual mechanism with the outside environment. It is a sort of representation.

When this sinks in deeply, I think a human being, and the human mind, can begin to understand that everything they sense, perceive, feel, or think, is a creation inside consciousness – it is not the reality outside. And I think in seeing this more and more deeply, one can get directly in touch with what is at the root of all of us — energy. I believe all the forms of meditation, prayer, and ritual, are methodologies by which people can begin to understand themselves in deeper ways, to get to their core, to what they have always been. Is it more reasonable to consider yourself a human being that’s 20 years old, or the energy and light that make up every part of you, that have been around since the big bang?

This is something that scientific theory agrees with right now, from quantum mechanics to early universe cosmology. So why is it so weird to imagine we might know it directly, instead of only conceptually? I believe the few humans who have experienced spiritual enlightenment are those who have seen themselves all the way to their source. After all, it is the mind that considers us as separate individuals inside an environment. Isn’t is all just one system, before that thought of separation appears?

What inpires you? Something that gets you up in the morning, everyday.

The more my personality and thoughts get out of the way of what this human mind and body want to naturally do, the more I am naturally happy, and naturally energetic. If you depend on something specific to give you that energy, you will be its slave. The energy is there always for the taking. All it really takes is looking inward, and beginning to try to truly understand yourself, instead of trying to focus all of your attention on the world outside and how you might move within it.

As simple as that sounds and seems in the beginning, one thought and meditation has caused the primary shift in my life over the last few years: the idea of being aware of your own existence. Not thinking about it, just noticing it, from moment to moment. I invite you to try it as an experiment, and see what happens 🙂

Thanks for your time!

A few days ago, we did a video round up of some of Jeff’s kinetic sculptures. Check it out here!