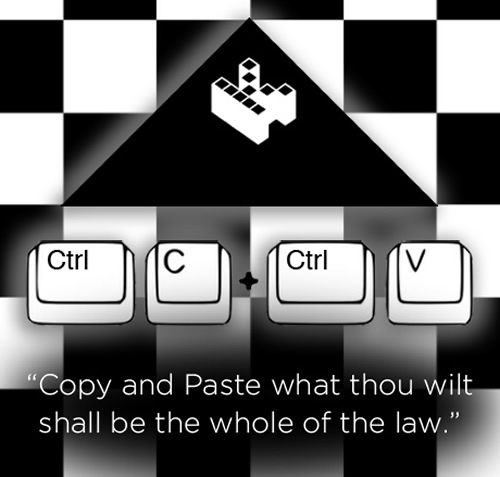 I spend two decades, yes, two full decades, naked in the dark. That is 20 years of sheer darkness. Whilst being naked.

My life had no meaning.

Then, one day, enlightenment came to me. It came to me as if it had been an act by none other that the almighty himself.

I became a beleiver. And religious. Finally, lost people like me have a religion that we can follow. I am talking about nothing other than Kopimism. I suggest that you all become proud Kopimists.

The Missionary Church of Kopimism has been granted a status of a religion in Sweden, thanks to the efforts of 20 year old philosophy student Isak Gerson.

“I think that more people will have the courage to step out as Kopimists. Maybe not in the public, but at least to their close ones, There’s still a legal stigma around copying for many. A lot of people still worry about going to jail when copying and remixing. I hope in the name of Kopimi that this will change.” TorrentFreak quoted him as saying.

“We confessional Kopimists have not only depended on each other in this struggle, but on everyone who is copying information. To everyone with an internet connection: Keep copying. Maintain hardline Kopimi,” he added.

You can join the religion here. You should try in a few days, as the site is down due to sudden heavy influx of traffic, as more and more people seek enlightenment through Kopimism.

You might want to check out Isak’s interview here.