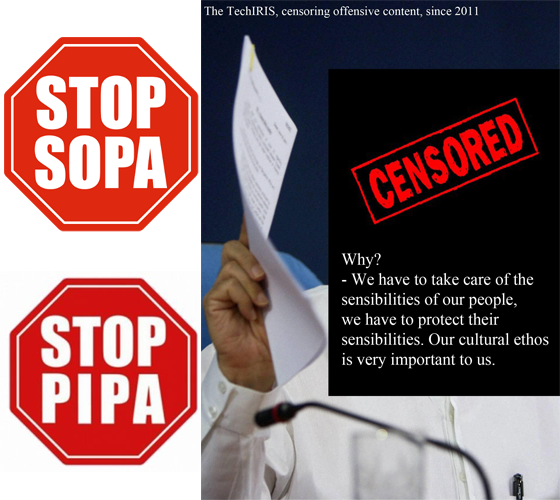 To be brief, not much.

SOPA/PIPA is the American name of the same disease, that is known as Kapil Sibal in India. The disease has been rumored to be viral, but does not affect the majority of the masses. We talked to a doctor researching the Indian strain of the virus, and he said that it only affects highly nonsensical idiotic people with no intellect whatsoever, having IQs in the range of 0 to -infinity etc. You know, the kind of people at the bottom of the human evolution.

One of the stupid thing in these bills is that the government will be able to block websites via DNS blocking. This has widely been declared as a threat to the basic architecture of Internet, as it is a security threat when DNSSEC comes along. Apart from that, it does nothing to actually block sites, circumventing DNS block is child’s play.

Censorship – All sites that have user uploaded content will have to censor their content, or else they will be liable for the piracy. This means that YouTube could be held liable, and blocked, if a user uploads a home-made video, with a Metallica song playing in the background.

The fact that high court asked sites like Facebook/google to screen content before it is uploaded, makes it clear, that the judges are involved with the politicians. This is a much worse situation.

The high court has demanded that these sites should filter all of the user uploaded content, in effect censoring the Internet. Having TV networks and print media under their control was not enough, and they are now turning to the world’s largest communication platform. The internet.

Another sad thing is that although Barack Obama has openly expressed opposition to the bills, his Indian counterpart is on his way of winning a world record for longest time without speech. Although, that is a feat in itself, it is not something expected from the Prime Minister. 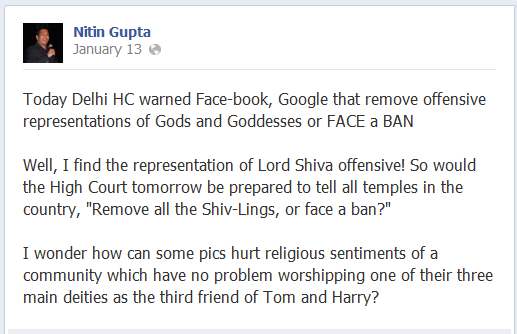 A notable thing about these laws is that both of them are being pushed by people with little or no understanding of the Internet, and with no mental capacity to achieve the same. Another very dangerous thing that these laws could do is kill Internet entrepreneurship. While Google/Facebook might have enough resources to implement such censorship, most internet start-ups do not. This could become a deadly tool in the hand of large corporations killing new services dead in their tracks.

None of this will happen though. We won’t let it happen. Mahatma Gandhi taught something beautiful to us. Rebel.

Sometimes I wonder, if all of this is just to get us distracted, while Rahul Gandhi becomes the king. Not that I like our current king very much, but Rahul Gandhi?! Well, if you want to, you can check out his achievements here.

BTW, if you want information on any other politician, netapedia.com is a very good resource.

What is your stance on all this? Comment below.