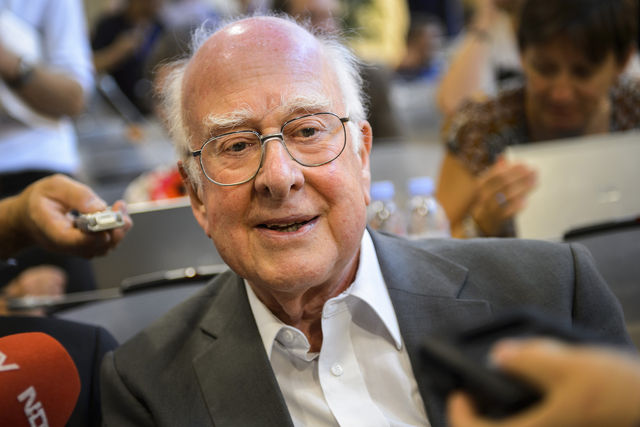 First of all, I am not trolling you again. CERN had a conference today. A big conference. Peter Higgs, the dude after which the particle is named, and two other science dudes, who had independently suggested the existence of such a particle, were invited. And then, during a serious presentation, full with comic sans fonts, they said that they have found a boson, that is 99.999% the Higgs Boson. But they played safe, and never said that it indeed is the Higgs Boson. This is a result of two independent experiments, CMS and ATLAS. There have been a couple of times, when such claims have been made, but later falsified. The results have been given a 5 sigma

For many scientists, it was only a matter of when, and not if, the particle will be found. But it’s discovery is a major milestone. How major? Well, more major than the one that proved that the earth is not flat. The Higgs Boson, completes the standard model, and helps explains what gives matter mass, and supports a lot of other important theories, that try to define our Universe. There are a bunch of other such particles, that do different things like make up light ( photons ), make non contact forces work, and other such cool stuff.

“I’m rather surprised that it happened in my lifetime – I certainly had no idea it would happen in my lifetime at the beginning, more than 40 years ago, because at the beginning people had no idea about where to look for it, so it’s really amazing for me to find out that it’s really enough… for a discovery claim,” Peter Higgs said at the conference.

I wonder if Peter Higgs has opened the bottle of champaign yet. An excerpt from his 2008 interview by Guardian.

What will he do if data from the LHC does, as most physicists expect, confirm the existence of the Higgs boson? “I shall open a bottle of something,” he says, back in coy mode. A bottle of what? “Champagne,” he says thoughtfully. “Drinking a bottle of whiskey takes a little more time.”

This is a great achievement for the LHC, as this was one of the major experiments happening in there. I wonder when they will make canisters that hold matter and antimatter, and can annihilate and destroy cities, if misused. Hopefully, Robert Langdon will save us, if that happens.

BTW, it will take some more time, before we can say with 100% certainty that the Higgs Boson has been found.

And here’s Neil deGrasse Tyson on the discovery –